In the field of robotics research aerial robotics raised 15 years ago, when technologies like microelectromechanical 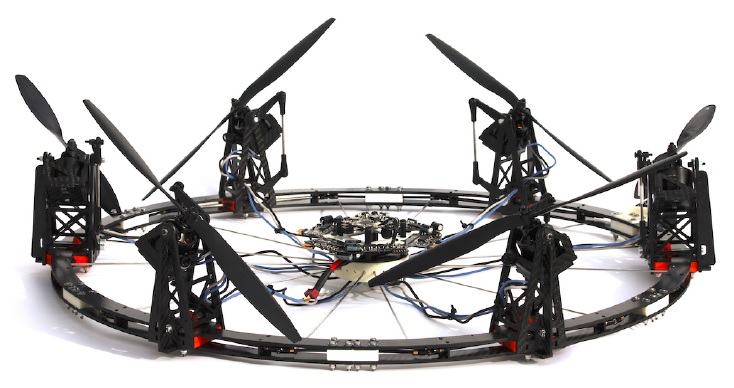 systems, energy storing, and miniaturized computational power achieved a level such that all needed components could be integrated in a single flying machine. When further integration was possible a new subclass of aerial robots was developed, the so called micro aerial vehicles (MAVs). Many amazing results have been published on control and maneuvering of MAVs. MAVs are used today in many real-world applications like meteorology, agriculture, archeology and many more. Here they show their beneficial use and capabilities.

In the last few years a new idea arose in the aerial robotics research community: the possibility to physically interact with the environment and other ground and aerial robots.  Aerial robots converted from pure observers to real flying service robots. This new field of research will again have a significant benefit for our future society.

My research aims to bring autonomous aerial robots into interaction with the real world. During my Ph.D. I developed one of the first fully actuated aerial vehicles. During my PostDoc at LAAS-CNRS I investigated approaches to utilize different novel fully actuated aerial vehicle in interaction and manipulation tasks. We designed a sensorless control (no force torque sensor) framework based on and admittance control scheme. Furthermore, I formally investigated the failure robustness of multi rotor platforms with respect to motor failure. I developed a novel trajectory tracking controller based on SO(3), by taking output saturations (physical limits) into account and prioritizing position over orientation tracking. As well, I investigated optimal trajectory planning for fully actuated aerial vehicle.